The State of Play

MEMORANDUM
To: Interested Parties
From: Luke Blanchat
Campaign Manager, Thom Tillis for Senate
Date: March 4, 2020
RE: The State of Play

Our lack of a serious primary challenge allowed us to amass a substantial cash on hand figure, while we built out a robust ground game, and solidified Senator Tillis’ position as commonsense-conservative who will continue working with President Trump to deliver wins for North Carolinians.

The Democrats, on the other hand, endured an expensive, bitter primary that forced Cal Cunningham to spend over $3.2 million from his own campaign account, resulting in the 3:1 cash on hand disadvantage he now faces. Cunningham’s primary also highlighted his far-left positions on a number of critical issues that he would have otherwise tried to hide from voters, and he enters the general election fully embracing the radical liberal agenda of the Democrats running for president who he vowed to support.

Both financially and politically, Cal Cunningham’s primary victory was a costly one.

WHERE THE RACE STANDS: POLLING UPDATE

Our polling firm, Public Opinion Strategies, in January conducted a statewide general election poll of 800 likely voters in North Carolina. The survey was taken between January 11-15, and has a margin of error of +/- 3.46%. It included 400 cell phone respondents.

The poll had four key findings:

Senator Tillis had a lead over Cal Cunningham

Republicans had a lead on the generic Senate ballot

Cunningham will surely see an artificial bump given the millions of dollars that have been spent in the past few weeks to try and salvage his campaign. However, the general election opens with one candidate well positioned with the North Carolina electorate, while the other has moved far to the left and embraced potential presidential nominees who have radical agendas that will be a devastating drag on his chances in November.

WHERE THE RACE STANDS: ON THE ISSUES

The 2020 primaries turned the conventional wisdom of the pundit class on its head. In September, it was widely assumed that Senator Tillis would have the difficult primary that would pull him to the right, while Cal Cunningham would simply spend his time raising money and pandering to the political middle. What a difference six months makes.

Senator Tills begins the general election right where he was when he announced his candidacy: firmly in the center-right. That is a very good place to be, given that Republicans have seen a net gain of 198,019 voters since President Trump won North Carolina in 2016, and that the Democratic Party has moved 50 points to the left on the ideological spectrum over the last 20 years in our state, repelling unaffiliated voters.

In addition to the contrasts that already exist in the race as a result of Cunningham’s lurch to the left in his primary, the biggest difference between Cal Cunningham and Senator Tillis is that one candidate supports a president who will preserve the free market system that has made this country great, while the other is backing radical, liberal candidates who want to raise taxes and drastically expand government control over the lives of North Carolinians. Cunningham vowed in the primary to support whoever is the Democratic nominee for president, and now he is stuck with no good options.

Cunningham will either spend the fall rubber stamping Bernie Sanders’ agenda, including:

Or he will have to defend Joe Biden’s ideas to:

The Cunningham campaign can spin it all they want, but this is not where they wanted to end up on March 4th. And now that Cunningham has already agreed to five televised general election debates, he will not be able to hide how far left he has veered on the issues.

WHERE THE RACE STANDS: ORGANIZATION & RESOURCES

While the Democrats were busy seeing who could race furthest to the left, our campaign was uniting the party and getting a jump start on the general election. We now have $5.4 million cash-on-hand, while Cal Cunningham has just $1.5 million to his name. Our cash on hand ratio after the fourth quarter of 2019 was better than any incumbent Senator from either party facing a competitive race this cycle. Cunningham’s cash on hand is even worse than it looks because he was forced to spend his primary tapping $1.1 million of his allotted $1.6 million in DSCC coordinated funds – that’s $1.1 million he won’t be able to get back in the fall. The resource advantage Senator Tillis has gained will be critical, as we will likely be outraised in each quarter from here on out and will need to increase the pace of our fundraising in order to keep up.

BASED ON FOURTH QUARTER FILINGS 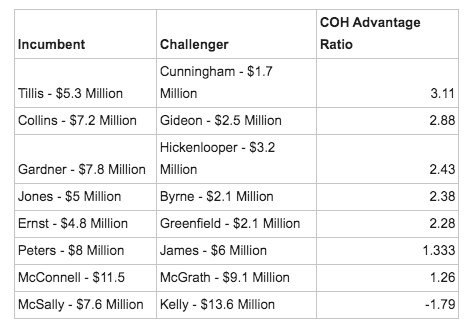 We also have an army of supporters who are ready to win in November, and who are ready to work to make that happen. We have already engaged key groups of volunteers such as our Statewide Grassroots Leadership Team, our Veterans for Tillis coalition, and Farmers for Tillis coalition. Additionally, the statewide door-to-door voter contact effort on behalf of Senator Tillis has been in progress since September and we have field offices set up in every region of the state. While the competitive nature of the Democratic primary forced our opponents to spend their time talking to the most liberal voters in the state, our team has already started taking Senator Tillis’ message to Republicans, Democrats and Independents.

Not all primaries are the same. Some nominees emerge stronger, while some emerge weaker. The 2020 Senate primaries were a boon for Senator Tillis, who now has  a solid resource advantage that he will certainly need every last dollar of, and a commonsense conservative record of accomplishments in line with the views of North Carolinians. The Democratic primary made clear that Cal Cunningham is a far-left liberal who supports radical presidential candidates outside the political mainstream in North Carolina, while also depleting his coffers at the same time. Our campaign, by contrast, enters the general election in a strong position, and ready for the race ahead.