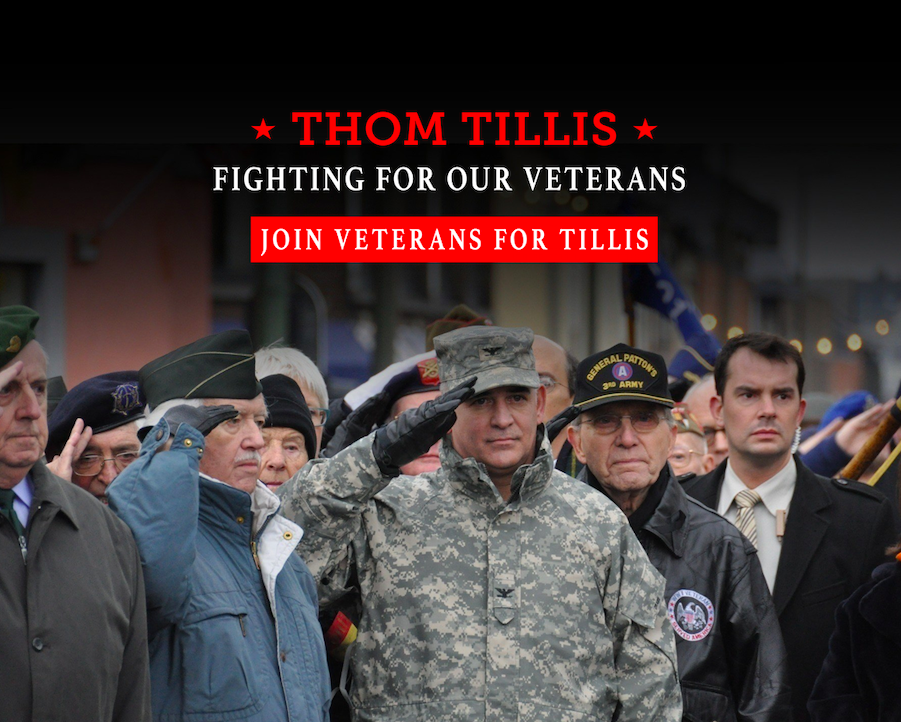 CHARLOTTE, N.C. – Following Friday’s release of its statewide grassroots leadership team, the Tillis for Senate campaign today announced the co-chairs of “Veterans for Tillis.” This group of six former service members will lead the effort to organize fellow veterans who support Senator Tillis, as well as assist the campaign in spreading his pro-veteran record across the state during the primary and general elections.

This is just the second of multiple leadership coalitions that the Tillis campaign will be unveiling in the coming weeks. The co-chairs of “Veterans for Tillis” are as follows:

“Serving veterans is one of the greatest honors I have in the U.S. Senate, and I am proud to have the support of these distinguished former service members,” said Senator Tillis. “I look forward to continuing to rely on the guidance of this strong leadership team as we build upon our efforts to provide quality health care, good paying jobs, and increased educational opportunities to veterans across North Carolina and the country.”

Rear Admiral Tina Alvarado said of Tillis, “Veterans across North Carolina and the Nation have better access to health care because we have Thom Tillis representing our needs in Washington. In championing legislation such as the Mission Act, Senator Tillis has been relentless when it comes to maximizing health care choices to ensure America preserves the sacred trust we owe to those who served.  I am confident he will continue those efforts when he is reelected.”

“Whether it’s been securing over $1 billion for military projects in our state or fighting for disability status for those victimized by toxic water conditions at Camp Lejeune, Senator Tillis has used his post on the Veterans Affairs Committee to put North Carolina veterans first,” said Major General Hugh Overholt. “His commitment to those who have served is incredible, and I look forward to being a part of his team so he can keep up the great work.”

“Senator Tillis understands the unique challenges facing those who return home after sacrificing for our country,” added Lieutenant Fran Perez-Wilhite. “Through the BRAVE Act and the VALOR Act, he is doing everything possible to expand employment opportunities for veterans, and he has my total support as he furthers these initiatives.”

Captain Matt Reyes said, “Senator Tillis has provided extraordinary leadership when it comes to expanding educational opportunities for veterans and we’re lucky to have him serving us in the Senate. With all he has accomplished in his first term, I am eager to help get him reelected so we can see what he can deliver on next.”

Captain John Turner added, “There is no Senator who has done more for the veteran community than Thom Tillis. Senator Tillis promised to clean up the mess at the VA when he ran in 2014, and he has followed through on that promise. It will be an honor to help Senator Tillis win reelection in 2020 so he can build on his record of making the VA an organization that we can all be proud of.”

Sergeant Michael Verardo added, “As someone who has spent nearly a decade receiving operations and care from the VA, I can affirm that Senator Tillis’ constituent services program for veterans is second to none. I am excited to help  send him back to Washington for six more years so he can continue providing great assistance to thousands more former service members in need.”

The Tillis campaign earlier this week launched a new digital ad in honor of Veterans Day, which highlights Senator Tillis’ work on the Senate Committee on Veterans Affairs and the special bond he has formed with Sergeant Verardo.

Tillis also marked Veterans Day with an op-ed in the New Bern Sun Journal discussing the work he has done in the Senate to assist veterans. Just some of the veterans legislation Senator Tillis has championed includes:

*Senator Tillis also led the charge in getting the VA to grant disability status to the victims who were exposed to toxic water conditions at Camp Lejeune. His office has also resolved more than 4,000 cases for N.C. veterans *