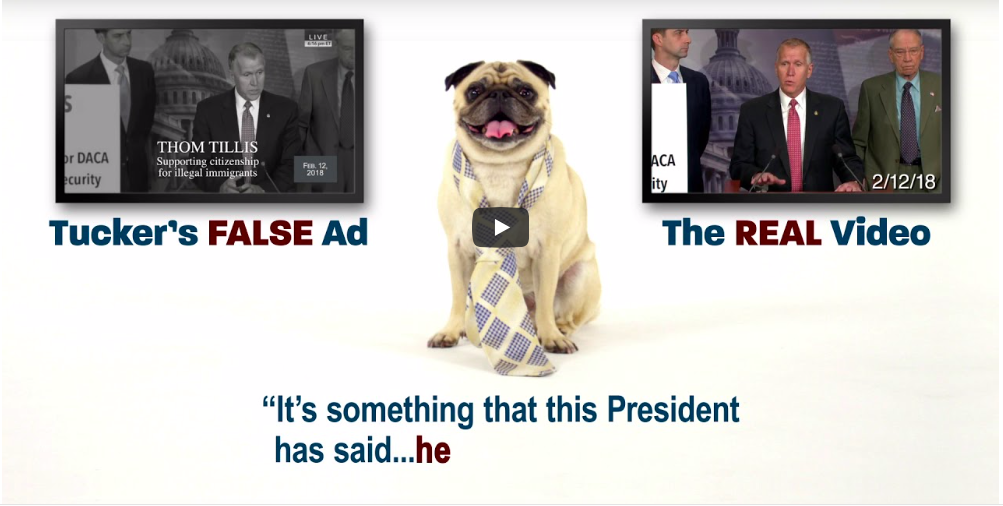 CHARLOTTE, N.C. – The Tillis for Senate campaign today released a new television ad that highlights Senator Tillis’ efforts to advance President Trump’s border security plan and sets the record straight on the lies pro-amnesty Garland Tucker has been telling to North Carolinians about the Trump-Tillis legislation to combat illegal immigration.

“Pro-amnesty Garland Tucker has spent over $1 million of his own money lying to North Carolinians about the Trump-Tillis border security plan in order to cover up for his anti-Trump, pro-swamp record.” said Tillis campaign manager Luke Blanchat. “Not only does this ad set the record straight for the people of North Carolina regarding Tucker’s false attacks on Senator Tillis and the President, but it also reinforces the clear contrast between Senator Tillis’ immigration record and the open borders, pro-sanctuary cities policies that his Democratic opponents will be attached to in the general election.”

None of Tillis’ Democratic opponents in the North Carolina Senate race have denounced the Democratic candidates running for president for their plans to decriminalize illegal immigration and to provide taxpayer funded health care for illegal immigrants. They have also refused to support Senator Tillis’ legislation to allow victims to hold sanctuary cities accountable.

NARRATOR: Politician Garland Tucker. He lies like a dog, using deceptive editing to make it look like Tillis is against Trump. The truth is, Tillis was supporting Trump’s proposal on immigration. Watch the part that Garland Tucker leaves out.

SENATOR THOM TILLIS (CLIP): It’s something that this president has said he will advocate for.