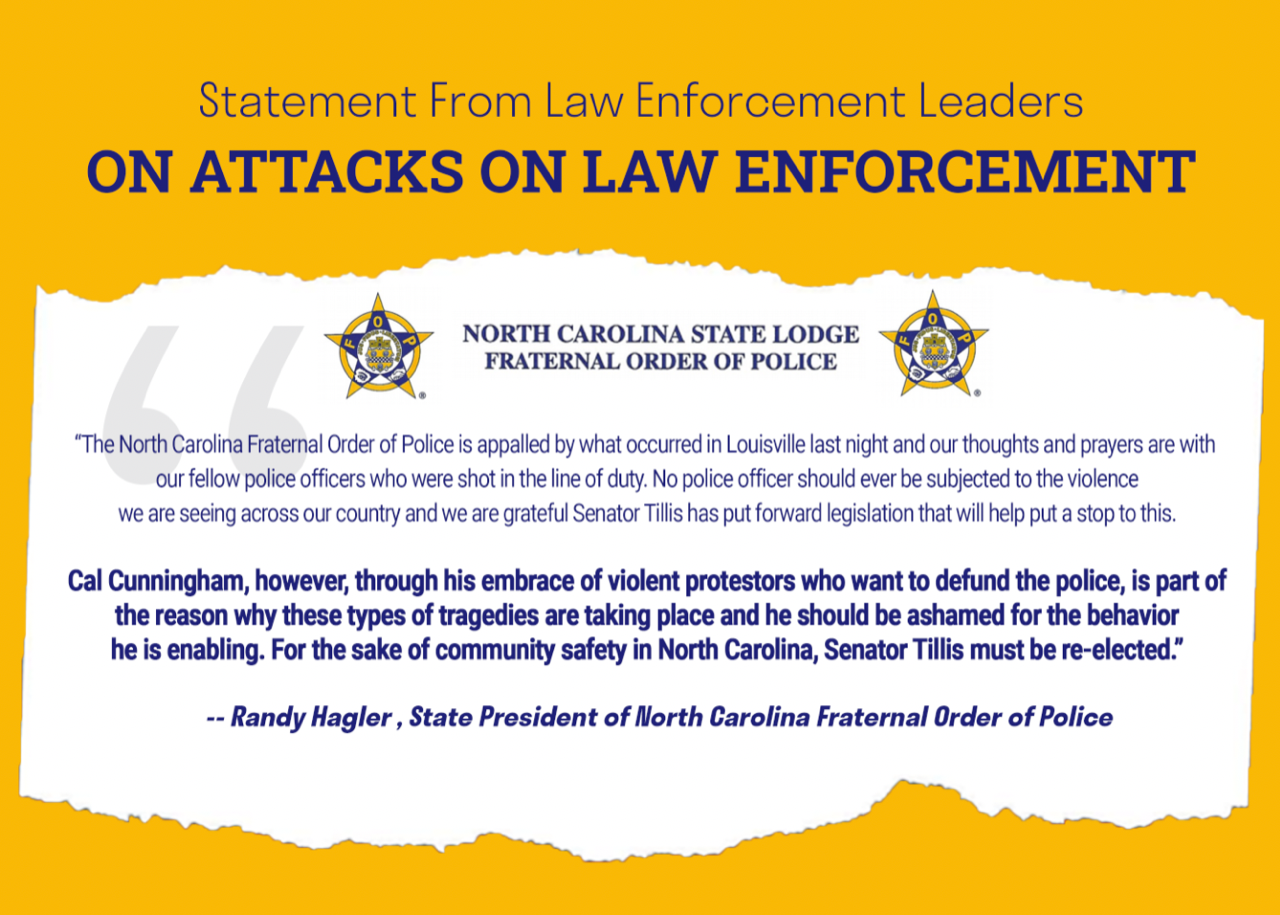 Incident Underscores The Need To Stand Up For Law Enforcement

“My thoughts and prayers are with the two police officers who were shot by a violent rioter in Louisville last night,” said Senator Thom Tillis. “This disgusting act further underscores the need to stand up for our brave men and women in blue and the contrast in this campaign when it comes to public safety. Cunningham’s anti-police record is clear. He encouraged violent rioters in May, said he ‘joins the fight’ of protestors who want to ‘abolish the police’ in August, has cut law enforcement funding by 22% over the course of his career in public service and now wants to make it easier to sue police officers. While I’m fighting in the Senate to punish those that target law enforcement, Cal Cunningham has completely capitulated to the radical liberal mob that wants to destroy this country and make our communities less safe.”

North Carolina Fraternal Order of Police President Randy Hagler added, “The North Carolina Fraternal Order of Police is appalled by what occurred in Louisville last night and our thoughts and prayers are with our fellow police officers who were shot in the line of duty. No police officer should ever be subjected to the violence we are seeing across our country and we are grateful Senator Tillis has put forward legislation that will help put a stop to this. Cal Cunningham, however, through his embrace of violent protestors who want to defund the police, is part of the reason why these types of tragedies are taking place and he should be ashamed for the behavior he is enabling. For the sake of community safety in North Carolina, Senator Tillis must be re-elected.”

“The attacks on Louisville police officers Wednesday night were a result of leaders who advocate for law enforcement defunding policies. The North Carolina Troopers Association feels very strongly that current efforts to cut law enforcement budgets leave officers and entire communities vulnerable to increased violence. The safety of our state is what is at stake this election cycle and we need more lawmakers like Senator Tillis who commit to opposing efforts to defund the police, not Cal Cunningham who has spent his entire career in public service cutting funding for law enforcement and will do it again if elected. We must re-elect Senator Tillis,”  said Sgt. Daniel Jenkins Jr, President of NC Troopers Association.