ICYMI: Tillis Talks Contrast With Cunningham In Interview With WLOS-Asheville 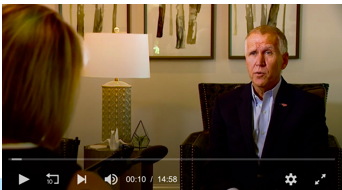 CHARLOTTE, N.C. – After Cal Cunningham declined a debate invitation from WLOS-Asheville, the station instead offered Senator Tillis a 30-minute sit-down to take his case for re-election directly to the people of Western North Carolina. In the exclusive interview that first aired last night, Tillis discussed his accomplishments, his goals for a second term, and the contrast between him and Cal Cunningham on handling the economy, holding China accountable, and the Paycheck Protection Program.

Watch the clip that ran on WLOS last night HERE. 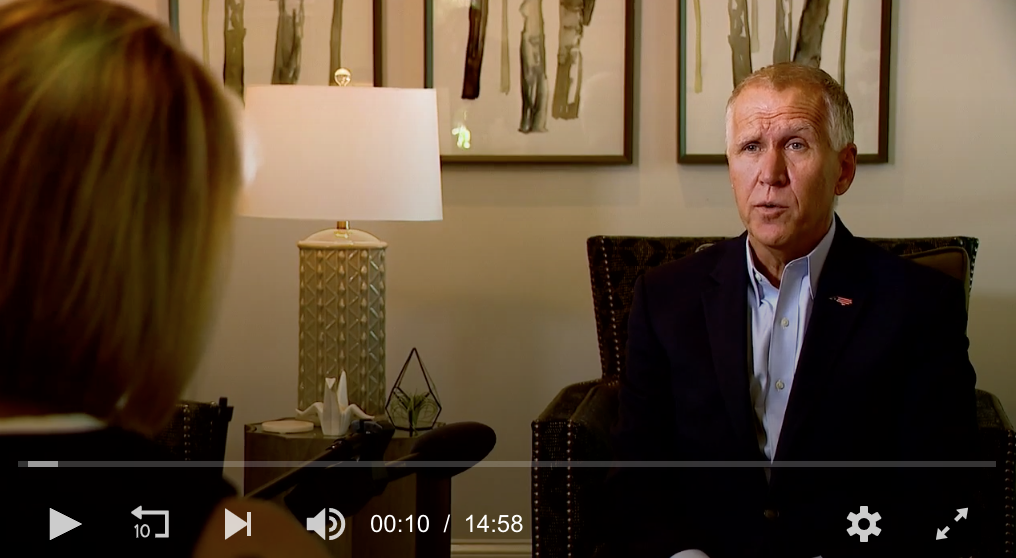 The full interview can be found HERE and the highlights are transcribed below.

Well, this is actually one reason that I wish we were having the debate with my opponent talking about stimulus. You know, I worked very hard on a bipartisan basis to get the CARES Act implemented. In the end, it was almost $3 trillion that provided individual assistance. The Paycheck Protection Program, which my opponent criticized and then worked for a company that applied for it, but it worked. It worked so well, it was so subscribed that we had to go back and provide additional money to make sure that the businesses had that bridge money to try and stay in business. It paid employees. The vast majority of the money was intended to help people and help businesses make payroll.

That’s another example where I wish we were on a debate stage because the first question I’d ask Cal Cunningham is why did you criticize the President? He blames China, he rightfully should. Look, if we don’t blame the country that 100 nations have expressed frustration with because it’s clearly the source of the virus and not only the source of the virus, they can’t help that. It occurred naturally, but then they didn’t share information. They destroyed test samples. They’re still not communicating honestly with the American people and with the World Health Organization. We have to hold them accountable and accountability is not only on the virus so we do not let them repeat this mistake again and have another pandemic of this scale. We’ve also got to look at the supply chains there. The protective equipment that you’re wearing and incidentally everybody else. I’m the only one because you’re wearing a mask, but the protective equipment- the majority of it gets manufactured in China. Pharmaceuticals- the majority of it gets manufactured in China. We cannot rely on a nation, and the communist government, not the Chinese people. They are good people who are being repressed. But the communist party owns the responsibility for this pandemic. We need to hold them accountable. Not to mention their military aspirations. What they’re doing in the South China Sea and how they’re flexing their muscles to become the world superpower. China needs to be held accountable on every single level. I can’t imagine why anybody running for office including Cal Cunningham would pull a punch on something as profound as that.

I think a lot of it is doing it at the federal level what we did at the state level. We inherited the leadership in North Carolina in 2011 at the height of the recession. As a matter of fact, I was talking with someone earlier today that our unemployment rate was 10.4%. So we went in and did what we had to do to get the economy right. We cut taxes. Contrast that against Cal Cunningham at the height of the recession in 2000, he voted to raise taxes and that extended the hardships on businesses and individuals in North Carolina.

Tillis On How His Economic Vision Differs From Cunningham’s

I think what we have to do is recognize that number one we have to recognize the profound problem we have right now. We have to recognize the historic unemployment. We have to recognize that people are suffering. We also have to recognize that three and a half years ago people were suffering. There were high rates of unemployment and that our leadership brought this economy back. I’m not pretending that that’s going to occur overnight. But I’m absolutely certain that someone like Cal Cunningham who agrees with Joe Biden that he needs to roll back the tax cuts, roll back the regulatory cuts is going to dig a deeper hole and make that vision of the economy and the lives that we were living at the first of the year out of reach for a whole group of people including the kind of people like the people I grew up with. You know, you grow up in a trailer park and you grow up as a seventeen-year-old moving out of home on a minimum wage job, I’m thinking about that kid because I was that kid. I really don’t think Cal Cunningham can because he’s never been that kid.

Tillis On His Goals For A Second Term

Tillis On His Record Of Accomplishments

I think the way that we win the day in November is that we communicate that I’m not running from my record, I’m running on my record. For the entire time I’ve been in public service since 2007, I’ve always focused on trying to give people freedom, give people economic opportunity, investing in community colleges- I’m a product of community college and five different universities before I got my degree when I was 36 years old- work skills, giving people opportunity, making sure that people who are struggling the most right now have every possible opportunity they can to be successful.

Tillis On Why He Wants To Debate Cunningham

Well, if I were in a debate with Cal Cunningham – and it’s unfortunate because we offered several debates, it looks like we may do some later this year – I’d say, where do you stand on the Green New Deal? I understand that you do support a tax increase that Joe Biden is proposing and proudly campaigning on. Do you really think we need to add back all these regulations that kill businesses? And Cal, is it true that while you were criticizing the Paycheck Protection Program that saved a lot of business in North Carolina, that you own company applied for a Paycheck Protection Program loan. I’m glad they did because maybe it helped them to survive. I would ask him those questions. I would ask him how he feels about defunding the police. Really? Do we really want to make our communities less safe by having law enforcement not show up? Do you actually join the chorus of people that think the majority of police officers are harming the community? I happen to think the odds are pretty high that if somebody comes through that door when I dial 911, they are probably good people. Are there bad ones? Yes. When they do something bad should they go to prison? Yes. But I’d ask him all those questions. I’d ask him why won’t you hold China accountable when they clearly are responsible for this pandemic?  Why did you criticize the President when he put tariffs on China to bring them to the table on a trade deal that was fair to the United States? Where are you on replacing NAFTA with USMCA? I would ask him those questions. I’d ask him, why did you raise taxes at the height of the recession at the beginning of this century? Why did you think that was good policy, Cal? That’s the discussion I want to have in a debate. And that’s just off the top of my head.

I have a buddy of mine, a former legislator out in the mountains, he had this old saying, if you learn us, you like us. I think if they go back and take a look at how I’ve conducted myself, working on a bipartisan basis. If they go back and look at the number of bills that we passed, including several veto overrides of a Democrat governor with Democrat support, I’ve cast a very reasonable, thoughtful tone as a leader. And as a member of the Senate, I don’t have a lot of patience for the fire breathing at either end of the spectrum. I want to get things done. And I believe that if they look at my track record – whether it has to do with the Justice Reinvestment Act here, that was criminal justice reform, it was one of the first of its kind in the country; if they take a look at what we’ve done for education choice for the poorest children, the most at-risk children in this state; if they take a look at criminal justice reform they’ve done up in the Senate – I’m trying to actually look out for everybody, not anyone party, not anyone socioeconomic strata, but making sure that everybody in this country is treated fairly and everybody in this country is given an opportunity no matter where they started.