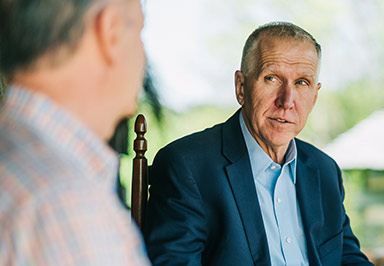 CHARLOTTE, N.C. – In an interview with WRAL last night, Senator Tillis discussed taking his campaign virtual, Cal Cunningham’s record of raising taxes and mismanaging Medicaid, and his opponent’s refusal to share their differing visions for North Carolina on the debate stage.

The full interview can be found HERE and the highlights are transcribed below.

Tillis On Taking His Campaign Virtual

Well, David, a year ago, you and I probably didn’t know what Zoom was. We certainly wouldn’t have been doing an interview and here we are today. I’m doing it on several fronts. Number one: I’ve stayed in touch with people in North Carolina through now, I think, 52 or 53 telephone town halls. We’ve reached over 500,000 constituents. We’ve answered questions, we’ve created casework and really encouraged them to follow the CDC guidelines, wear a mask, wash your hands, use hand sanitizer, do everything you can to help us fight the disease and on the campaign front, it’s the same thing when I have and opportunity. And it’s fairly limited now because the work that we’re doing in Washington and a lot of the blocking and tackling were doing when I’m in the state. But we’re reaching out to constituents and doing what we have to do to live with the reality that we have to socially distance. We’ll get our word out and I think at the end of the day we’ll be successful on November 3rd.

Tillis On Cunningham’s Tax Hikes And Medicaid Mismanagement And Cuts

Actually, what I regret was the mess that I was left when I became speaker- that actually started a decade earlier. When Cal Cunningham was serving in the legislature, voting to raise taxes at the height of a recession, cutting provider rates, taking more and more doctors and therapists out of the Medicaid system. Dave, when I came in in February and got a financial report, I was told that that year we were gonna be $750 million below what they had estimated just six months before in our Medicaid fund and then I had an experience. You may remember the town halls that I did. I had an experience on the sidewalk in Salisbury, North Carolina, with a mother and a young man, 29 years old, who had been told by the Perdue administration that a life saving daily therapy that he was receiving was being cut from his benefits. And I told everybody in the legislature until I could make sure that I can fulfill the promises that we’ve already made, I’m not gonna make new promises that I can’t keep. That’s why we worked very hard to go from deficits to surpluses in Medicaid, completely changed the way we deliver medication, increasing the number of doctors and therapists on it. And then later, when people will ask me if I would consider expanding Medicaid, I said at the time, I couldn’t because I’d be breaking promises to people who desperately need it. Their lives were on the line. This legislature, the governor can take a look at the circumstances now and see if they can make additional promises that they can keep.

Our state motto is to be rather than to seem. We took the unprecedented step as the incumbent to invite Cal Cunningham to as many as five or more debates. And every time that we try to get something done, we understand he’s busy. I think that people in North Carolina should see the sharp contrast between me and Cal Cunningham, and I welcome the opportunity to get to debate sooner rather than later. Last that I heard maybe August is going to go away without a debate. The people of North Carolina need to know the very sharp contrast between myself and Cal Cunningham. The way we were brought up, the fiscal policies that I’m very proud of having implemented, his fiscal policies that raised about a $1 billion in taxes when he was in the legislature. I’m happy to get on the debate stage and let the American people, let the people of North Carolina decide who’s the best person to be positioned for the U.S.  Senate. And when we do that, I believe they’re going to pick me.