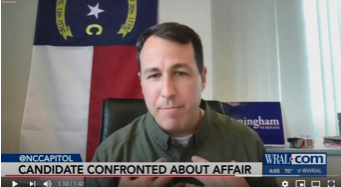 “This news conference was probably intended to get the Cunningham campaign back on track, but that’s just not how today worked.”

“If the goal was to shift the narrative or put this behind him, he did not achieve that.”

CHARLOTTE, N.C. – Yesterday, Cal Cunningham attempted to draw attention away from his affair with a wounded combat veteran’s wife that has landed him under investigation by the U.S. Army Reserve by hosting a “press conference” on another topic, but his virtual event did the exact opposite. The “cringeworthy” press conference made his scandal worse when Cunningham hypocritically declined to answer questions about his misconduct even though he has based his entire campaign on his personal life and biography.

WSOC: “The public didn’t learn anything new from Cal Cunningham’s press conference today and if the goal was to shift the narrative or put this behind him, he did not achieve that…In a brutal and at times uncomfortable press conference, Cal Cunningham once again apologize, but was more evasive than frank” 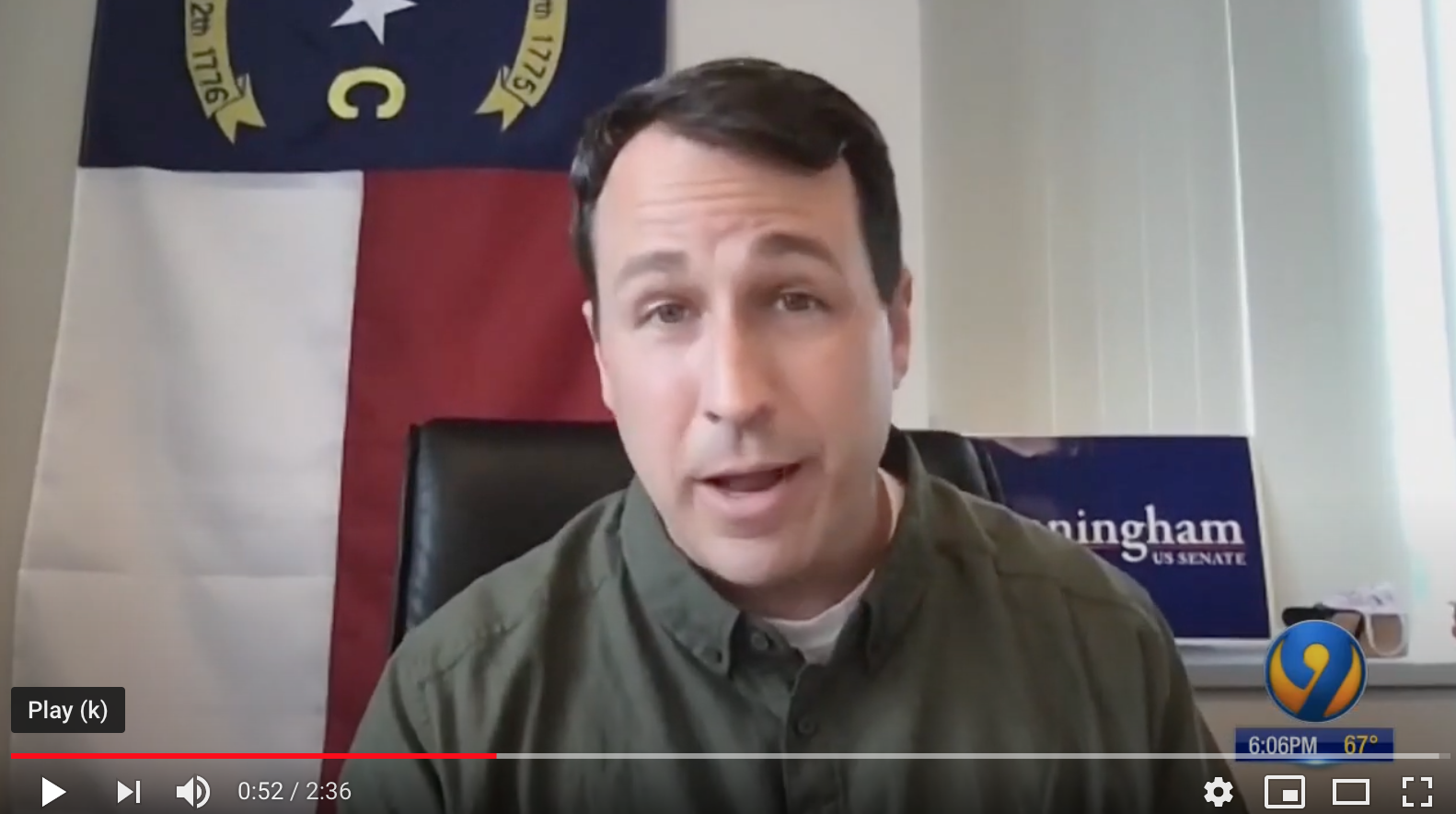 WRAL: “This news conference was probably intended to get the Cunningham campaign back on track, but that’s just not how today worked.” 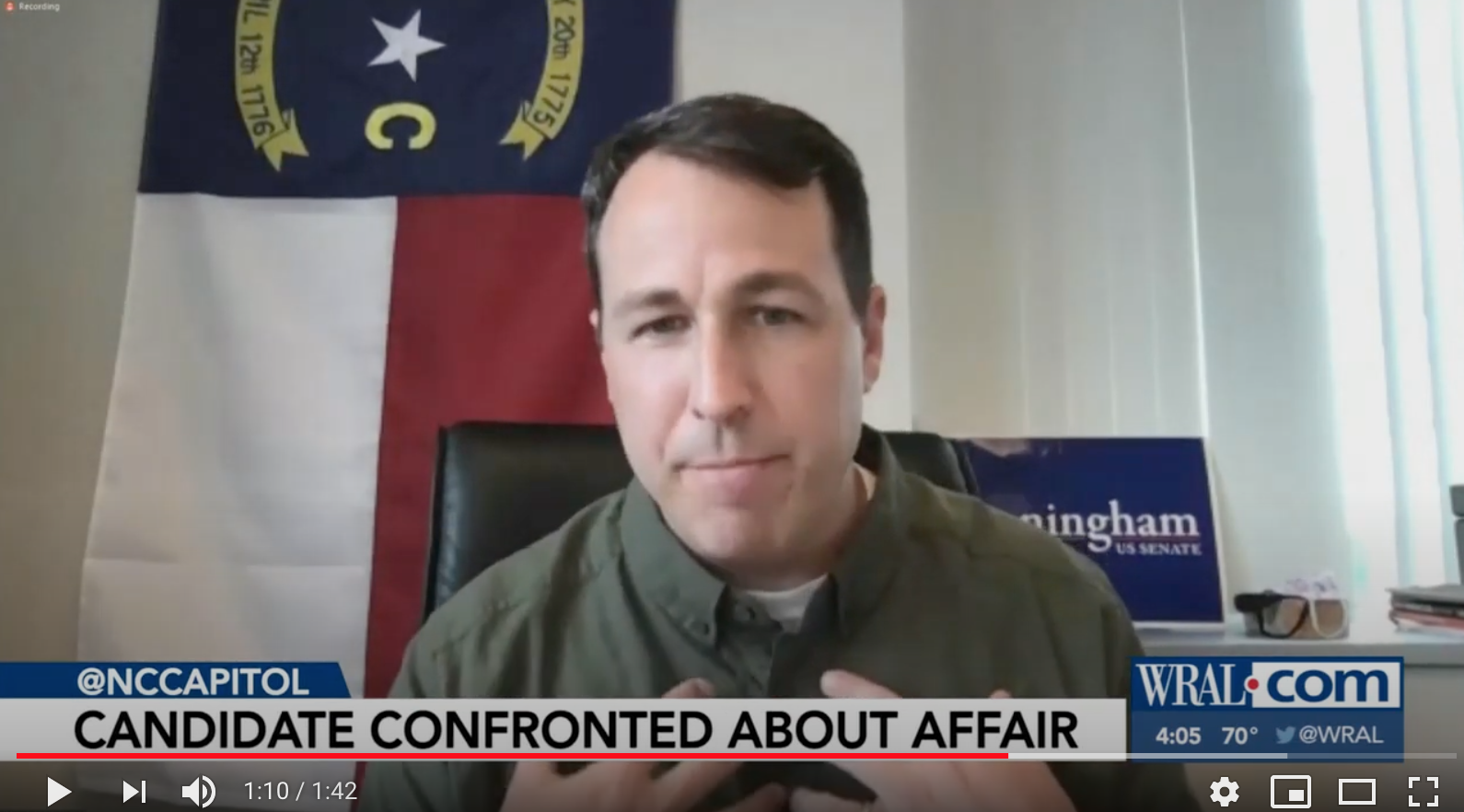 WCNC: “What’s noteworthy is more so what he didn’t say compared to what he did say. Today, Cal Cunningham was asked four different times if there are any other women out there with whom he may have cheated with and he never answered the question.” 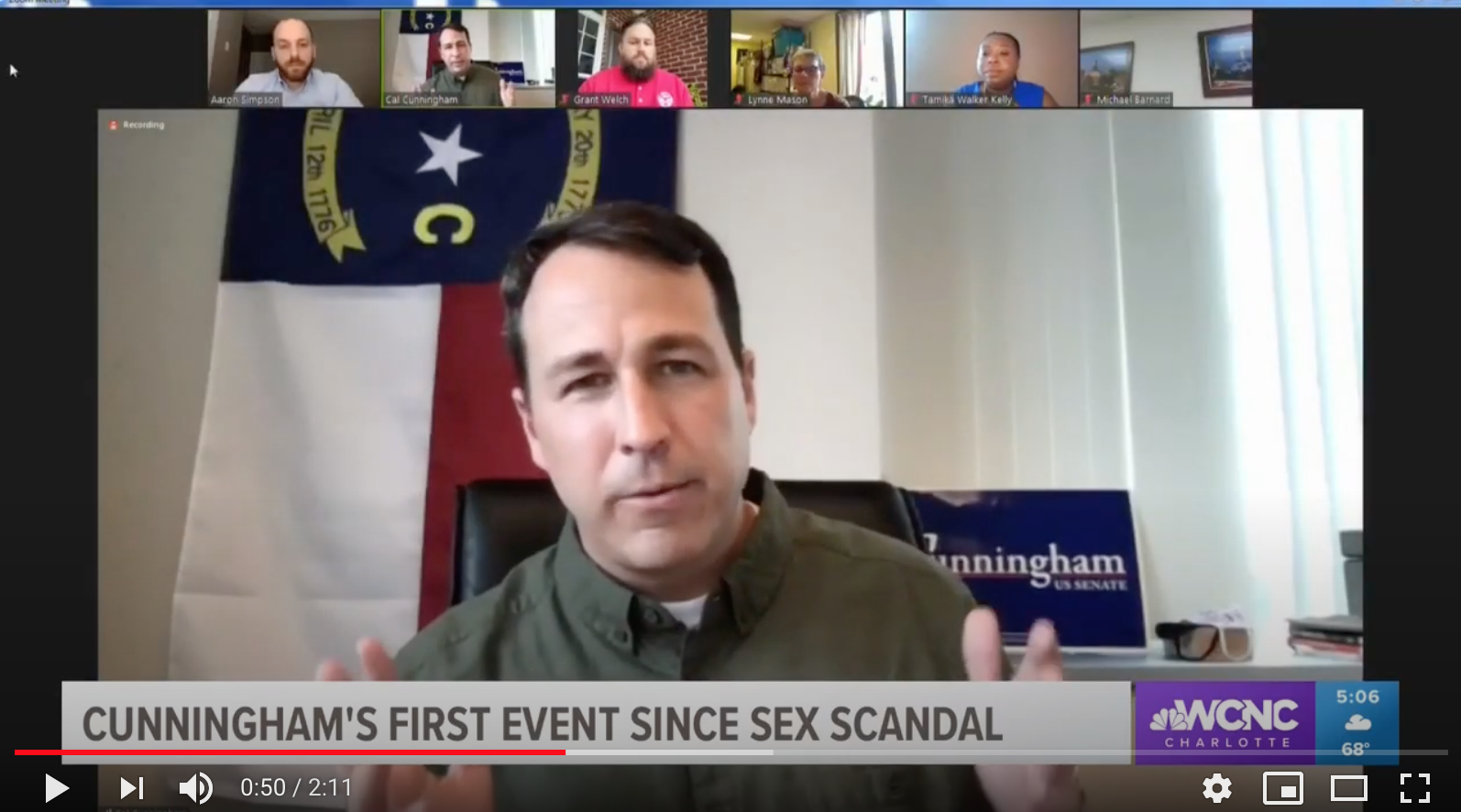 Associated Press: “Democratic U.S. Senate candidate Cal Cunningham refused on Friday to address whether other sexual affairs could surface days after The Associated Press reported his intimate encounter this summer with a public relations consultant…During a virtual news conference, he wouldn’t respond directly to multiple questions from reporters about the existence of other affairs or extramarital allegations.”

Fayetteville Observer: “Twice directly and twice indirectly, news reporters on Friday afternoon asked Democratic U.S. Senate candidate Cal Cunningham whether there are more extramarital affairs in his past that could continue to rock his campaign and his tenure in office should he win. And each time, Cunningham said a lot of words but never answered…Each time, Cunningham reiterated variations of the talking points he has made since he confirmed over the weekend that sexually oriented text messages between him and another woman were authentic.”

WFAE: “North Carolina U.S. Senate candidate Cal Cunningham refused to answer questions Friday about an alleged affair he had earlier this year. Earlier this week, Cunningham said he is “deeply sorry for the hurt” he has caused in his personal life. But in his first news conference since the scandal was disclosed a week ago, he refused to discuss the issue further.”

WBTV: “North Carolina Democratic U.S. Senate candidate Cal Cunningham again apologized Friday in response to allegations he may have had an extramarital affair, and seemed to dodge questions about whether more allegations could surface in the future.”

WRAL: “Cunningham’s campaign scheduled a virtual news conference to discuss the need for a better response from Congress to the ongoing coronavirus pandemic, but every question he was asked was related to his affair with Arlene Guzman Todd, a public relations strategist from California and the wife of an Army veteran…But reporters put a question to Cunningham four times about whether he was involved with any other women, and he refused to answer directly every time.”

WNCN: “U.S. Senate candidate Cal Cunningham (D) did not answer specific questions Friday about his extramarital affair, including whether he’s had relationships with any other women while married.”

Sinclair: “The news worried many Democrats who view the North Carolina Senate seat as a tipping point for winning back control of the Senate.”

Washington Post: “Republicans made a compelling argument when they said Cunningham single-handedly managed to undercut his central premise as a candidate about honor and duty as a veteran and family man. In a disastrous interview Friday with North Carolina journalists, he refused to answer multiple direct questions about whether there were other women.”

The Hill: “North Carolina Senate candidate Cal Cunningham (D) declined multiple times on Friday to say whether he carried on other extramarital affairs after he admitted last week to exchanging romantic text messages with a woman who is not his wife.In his first formal news conference since intimate text messages between Cunningham and a married California communications strategist surfaced last week, Cunningham repeatedly dodged questions about whether more revelations about his personal life would come to light…But questions about Cunningham’s personal life and behavior have swirled across the state in recent days, getting front-page headlines in some of North Carolina’s largest newspapers and top billing in local news broadcasts.”

Politico: “A week after news of an extramarital affair first came to light, North Carolina Democratic Senate nominee Cal Cunningham refused to say whether there were other women or other affairs during his time running for office. And he seems ready to keep his lips sealed for the next four weeks…”

Washington Examiner: “Democratic Senate candidate Cal Cunningham repeatedly dodged questions about if there are any other women he has had affairs with during a cringeworthy press conference on Friday.”

Townhall: “North Carolina Democrat Cal Cunningham held his scheduled first media appearance since his extramarital affairs became a national spectacle. His campaign allowed North Carolina reporters to ask the Senate hopeful questions, though Cunningham hoped that the press conference would be focused on holding incumbent GOP Sen. Thom Tillis “accountable,” as a deflection from his own self-inflicted scandal.”

Daily Caller: “During Cunningham’s first news conference since he apologized for the affair, Cunningham never answered the questions about whether he had other affairs and continued to dodge them throughout the press conference.”

Washington Free Beacon: “Cal Cunningham, the Democratic candidate for Senate in North Carolina, continued to dodge questions about his sex scandal during a virtual “news” conference on Friday. Journalists participating in the tightly regulated campaign event, which did not permit interruptions or follow-ups, asked multiple versions of the same legitimate question: Are there more women? Cunningham, who has admitted to and apologized for having an extramarital affair with a married woman from California, repeatedly refused to answer.”

The Blaze: “North Carolina U.S. Senate candidate Cal Cunningham (D) held his first press conference Friday since admitting to sexting a woman other than his wife, but refused several times to answer whether he had been involved with additional women outside of his marriage.”

WRAL’s Travis Fain: “Asked 4 times whether there are more affairs yet unrevealed, #ncpol Senate candidate Cal Cunningham declined to say. There was probably a version of this presser that started to put this affair(s) in the rearview. The Cunningham campaign did not attempt that version.”

WSOC’s Joe Bruno: “Phrased in a slightly different way, Steve Harrison tries for the 4th time to get an answer from Cal Cunningham on this. Cunningham didn’t answer the question again. Q and A is over and it was brutal.”

Washington Post’s Paul Kane: “Cunningham campaign took 12 mins of Qs, and understandably gave those Qs just to the reporters in the state. I’m OK with that, this is their race. And those folks drilled down and asked the right Qs, he ducked again and again, and then the next reporter hit him with same Q.”

Bloomberg’s Erik Wasson: “North Carolina Dem Senate candidate ducking and dodging on whether he has had more affairs”

The Philadelphia Inquirer’s Jonathon Tamari: “I’ve interviewed a lot of Democratic women over the past 4 years about their increasingly important role powering the party. Can only imagine how they feel about the antics of Cal Cunningham – after Anthony Weiner 4 yrs ago – endangering the political gains they’ve worked for”

Cunningham’s hypocritically dishonest press conference landed him on the front pages once again. 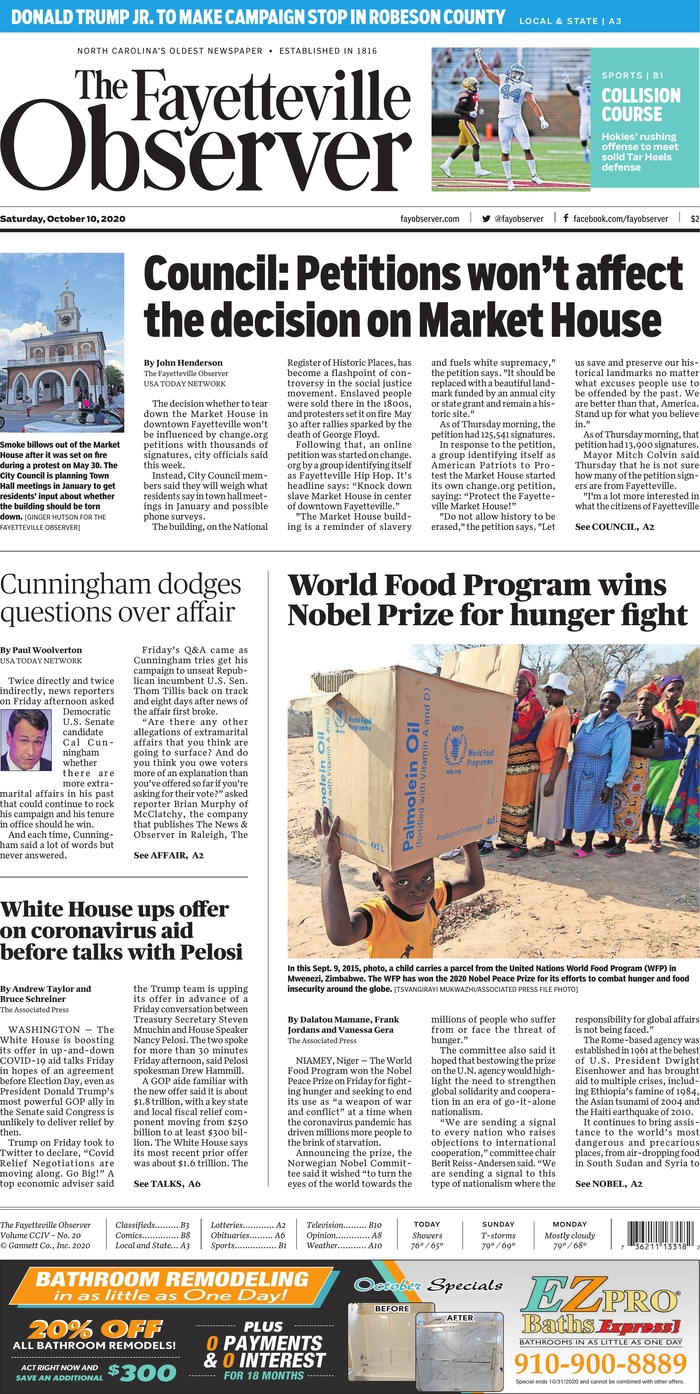