CHARLOTTE, N.C. – Thom Tillis Friday night addressed the North Carolina Republican Party’s virtual convention, where he discussed the differences between him and Cal Cunningham as well as the stakes for this year’s election. He spoke about how his blue-collar upbringing allows him to understand the struggles facing many North Carolinians right now, making him the best candidate in this race to lead the state back to economic prosperity. The stark contrast between his record of job-creating policies and Cal Cunningham’s record of raising taxes and his plan to do so again was also a point Thom emphasized during his speech. 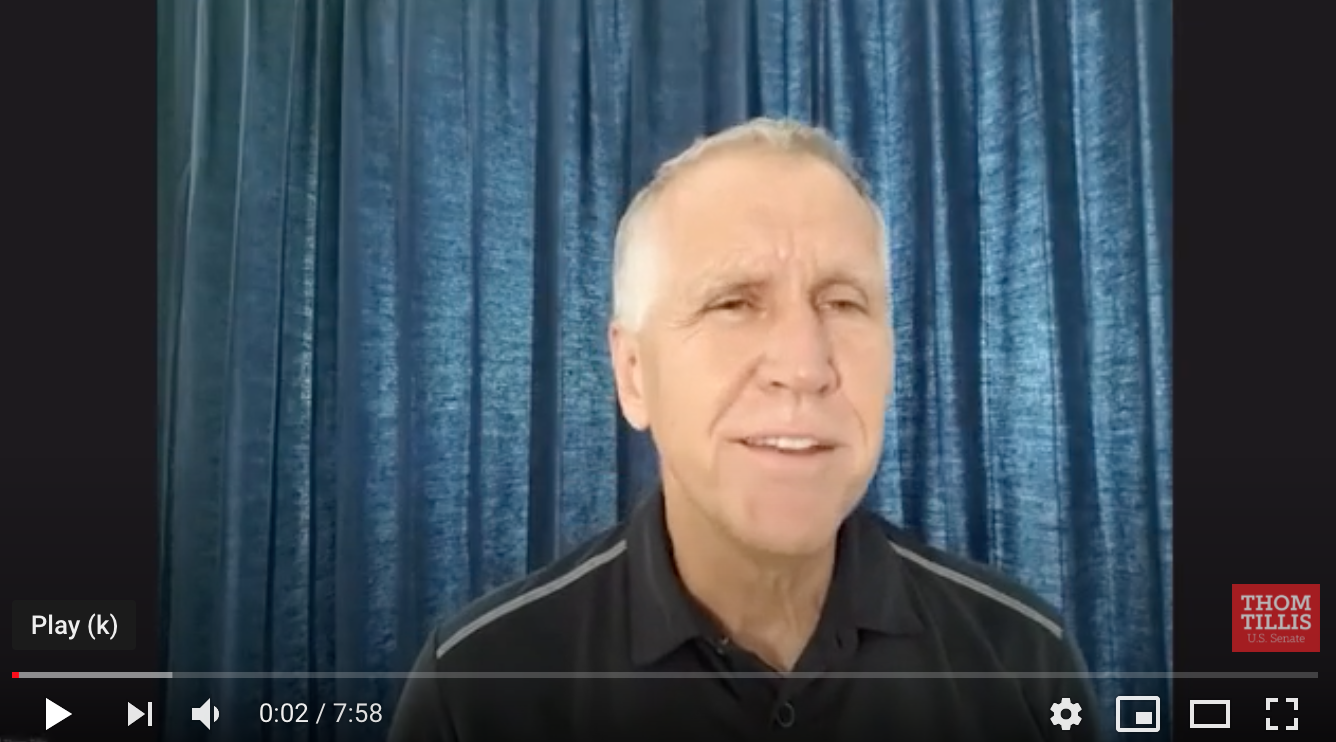 I want to talk a little bit about the fight that I have come November. There couldn’t be a starker contrast. You’ve got somebody- some of you know my background, but I grew up in a big family. We moved seven times before I was 16 years old. We lived paycheck to paycheck, but to be honest with you, I never felt like we struggled because I had strong parents with a work ethic that taught me that hard work and a positive attitude will get you anywhere you want to go in a country that lets you be free.

But here’s the real thing that made it happen for me; when I’m 18 years old living in a trailer park, this guy came on the scene called Ronald Reagan. After years of a country in decline under liberal policies, I could see that if I worked hard, I was going to do just fine. In a few short years, I moved out of the conditions that many people experience today into really a lifelong dream of a career, and then ultimately public service.

Now we’ve got Cal Cunningham. A guy that’s never- probably never- gone to bed hungry and probably never really understood what it takes to get out of the oppression that a government that regulates and taxes places on the people who need the help the most.

As a matter of fact, when Cal Cunningham came into the legislature in the recession in the early 2000s, he voted to raise taxes. That’s the last thing I’ll do. I didn’t do it in the legislature. As a matter of fact, we had historic and very successful tax cuts and when I got up to DC, I got to do the same thing. And I followed the President’s lead to make sure we reduced regulations and we gave people who are willing to work hard the opportunity to realize their dreams.
This election is about whether or not those kids who are growing up in trailer parks today are going to have the same opportunity I had when I was 19 years old. And with Cal Cunningham, there’s no way that they can be successful. He’s already said that he’ll raise taxes. Joe Biden proudly said he’s going to raise the taxes. He’s already said that the regulations that we cut were a bad idea. What he’s going to do is keep the people who need his support the most under the yoke of government and they can’t possibly succeed.

This election is a very, very important election. Getting President Trump re-elected is critically important because he’s fulfilled his promises. He said he would create a great economy, and in February, before COVID hit us, we had the greatest economic numbers, the greatest employment numbers among women and minorities that we’ve had since the numbers have been counted. We were moving in the right direction and thank goodness that Donald Trump was there. Can you imagine if we had had a Democrat president and a Democrat majority in the Senate and the House, what our economy would’ve looked like at the worst possible time? At least we had that economy to buttress us while we fight and ultimately win the COVID war.

But this election in November has a lot of consequences up and down the ballot. We have to get the President re-elected. We’ve got to keep the Senate, and North Carolina is considered the firewall for a majority in the US Senate. We’ve got to elect Dan Forest and everybody up and down the ballot including my buddy who just spoke before me, Justice Newby. What a courageous man he is. He stands alone with the Supreme Court in North Carolina that has completely gone to – they are not judges, they’re legislators in robes. We need objective, constructionist,  textualist judges that actually call the – the opinions that they make have to be made based on the Constitution- the state constitution, the federal constitution and the law. Every once in awhile, a good conservative judge makes us mad because he or she has to rule based on the facts, not based on empathy or based on maybe what people are thinking, but what legislators passed with what the founding fathers had in mind. I know that we get that from Justice Newby and I know that up and down the ballot – with Dan Forest, with all of our colleagues running in Congress, including the home district for this convention Greg Murphy, they do great work. We work well together and we’re going to continue to work well together because we need you to get us back.

Cal Cunningham, if he gets elected, is going to be a rubber-stamp for Chuck Schumer. Chuck Schumer recruited him. Is there any doubt in your mind that Cal Cunningham is going to vote for the leader of a majority Democrat Senate? Then let me tell you what he’s going to do, because Chuck Schumer’s already admitted it and Speaker Pelosi has already shown her hand. They’ve already passed a bill for DC statehood – two more Democrat Senators. They’ve already said they’re going to vote for the legislative filibuster, the nuclear option. What would that do? That means through simple majorities they will raise your taxes, they will do Medicare for All – which is Medicare for None – they will raise regulations, they will probably expand the Supreme Court. So now the Supreme Court of objective judges that from time to time make us mad because they go a different direction – we know that they’re doing it for the right reasons, even if we disagree – But can you imagine a Supreme Court of maybe 15 liberal judge majorities – what they’re going to do? They’re going to be legislators, they will be basically legislators in robes.

This is not, to me, high-minded or wild thinking. This is exactly what Chuck Schumer did when he went to Cal Cunningham and said, “ Cal, I want you to run and beat Thom Tillis. I need people to rubber-stamp my policies and I want to take this country in a direction that it’s never been before.”

The stakes are very high this election, but you know why I know we’re going to win? Because people remember how good their lives were back in February. They remember the majorities who brought that prosperity to this country. The kids in the trailer parks, the people struggling the most, the small businesses that Cal Cunningham condemned for actually getting Paycheck Protection Program loans- incidentally the company he worked for- are counting on us to make sure that the government gives them the opportunity to thrive. They don’t want a handout, they just want the freedom that we all enjoy to be able to work hard and be rewarded for hard work.

And we’re mainly going to win because folks like you are willing to, under any circumstance, rise to the call of the North Carolina Republican Party and do your part to make sure that we’re successful in November. President Trump, Thom Tillis, Dan Forest, Justice Newby, Council of State, up and down the ballot, it’s on us and we can do it and I know that we will.

God bless you all for participating in this event. Make sure that if you need any help from me, contact me at my political website at “thomtillis.com.” I don’t think that I can mention my official one, but if you google me, you’ll find it. We do a lot of casework right now because we know people are hurting and I want to do everything I can to make you as successful as possible.