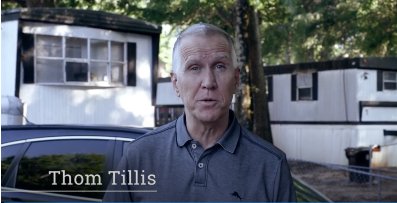 “It’s a strong, humanizing campaign ad. And one that may make a difference in the competitive race.”

CHARLOTTE, N.C. – Senator Thom Tillis yesterday released “Humble,” his first TV ad of the general election. The spot features Senator Tillis sharing the story of his blue-collar upbringing and how it uniquely prepares him to fight for the jobs of hardworking North Carolinians as we move into the recovery phase of COVID-19.

Here’s what they are saying about the ad:

Associated Press: “The commercial shows Tillis in what appears to be a trailer park. He talks about his family moving seven times before he was 16 and living ‘paycheck to paycheck.’” (AP, 5/26/20)

Raleigh News & Observer: “U.S. Sen. Thom Tillis, facing one of the toughest re-election bids in the country, used his first television ad of the 2020 general election to cast himself as a fighter for those struggling to make it. ‘My job is fighting for your job,’ Tillis said in the 30-second spot… The ad, in which Tillis highlights his working-class upbringing and frequent moves across the South, marks an unofficial restart of the race — which could be the one that determines which party controls the U.S. Senate in 2021. In the ad, he says his humble roots taught him humility, which he has brought to the Senate…In the television ad, which shows a family loading a U-Haul in a trailer park, Tillis is reaching out to those who have lost their livelihoods or are on the edge financially.” (News & Observer, 5/26/20)

North State Journal: “Senator Thom Tillis has launched a new TV ad highlighting his “blue-collar upbringing” as campaigns pick up from where they left off as the coronavirus pandemic upended the campaign trail.” (North State Journal, 5/26/20)

Spectrum News: “Meanwhile Senator Thom Tillis releases his first TV ad of the general campaign. In the ad he talks about how his childhood moving multiple times to different states and he says he’ll help restart the economy for folks who are the hardest hit by this Coronavirus.”  (Spectrum, 5/26/20)

Townhall: “Sen. Thom Tillis (R-NC) and his family moved seven times by the time he turned 16. Some of those temporary homes included trailer parks in Florida and Tennessee, and rental houses in Louisiana. For years the Tillises lived paycheck-to-paycheck. The senator shared all this to prove that he knows more than most politicians the needs of struggling Americans…It’s a strong, humanizing campaign ad. And one that may make a difference in the competitive race.” (Townhall, 5/26/20)