ICYMI: Senator Tillis On Impeachment: “While they were focused on this, they haven’t focused on things that people in North Carolina want done”

CHARLOTTE, N.C. – Senator Thom Tillis joined Fox News’ America’s Newsroom earlier this morning to discuss his opposition to the articles of impeachment that Nancy Pelosi unveiled today and how Congress should get back to doing the work of the American people. While Tillis has taken a firm position on impeachment, North Carolinians continue to wonder where Cal Cunningham stands on the issue. It’s been a week since Cunningham, who has said President Trump abused his power, dodged three straight questions about whether or not he supports impeaching him. 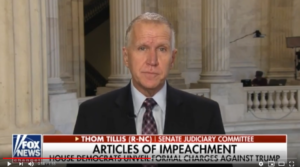 BILL HEMMER: Mitch McConnell cleared the calendar for the Senate in January. How long will you expect this trial to last with Chief Justice John Roberts in that chamber?

SENATOR TILLIS: Bill, we’ll probably finish it before you take your new post at the three o’clock time slot on January the 20th. I think it’s going to take a couple of weeks to give the President his opportunity to defend his reputation. And it gives the White House Counsel the opportunity to further undermine what I think is a very weak case to begin with, that never rose to the level of impeachment. While they were focused on this, they haven’t focused on things that people in North Carolina want done, like the USMCA, like funding the government, like the National Defense Authorization Act. But I do think the President rightly deserves his time in court and to have his opportunity to question the underlying credibility of the case.

BILL HEMMER: So you are saying that this will be a two week trial – no more?

SENATOR TILLIS: I think that it could be in the range of two to fewer than three weeks. And there is a possibility that maybe we even move it up a little bit sooner. That’s the current date. But I think that Leader McConnell was right to clear the calendar and send a message over to Nancy Pelosi, and Nadler, and Schiff that we are prepared to actually hear the case and then dispose of it. And I think it is going to be disposed of maybe not even along party lines. I believe there are some Democrats who are concerned with the process too over here in the Senate.

BILL HEMMER: How many?

SENATOR TILLIS: I’m not going to get into numbers, but I think there are some fair-minded people that are looking at this and are saying, my gosh, you’ve been trying to impeach this president since before he was ever sworn into office. Enough is enough. We need to get back to doing the work of the American people and focus on the priorities of people in North Carolina.