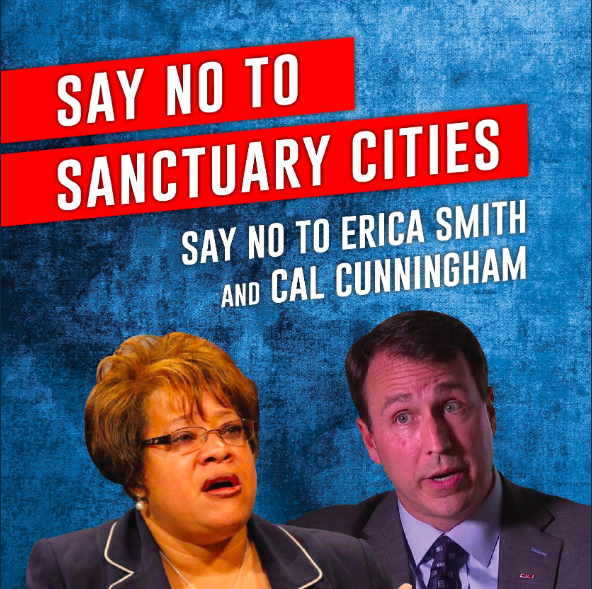 Supports Sanctuary Cities, Does Not Rule Out Taxpayer-Funded Health Care For Illegal Immigrants

CHARLOTTE, N.C.– Last week, Cal Cunningham took a break from making fundraising calls in his windowless basement to do an interview with WFAE’s Steve Harrison in which his radical immigration agenda was on full display. Cunningham was asked by WFAE if he supports the reckless sanctuary cities policies that have resulted in nearly 500 undocumented immigrants, including people charged with sex offenses, kidnapping, arson and homicide, to be released from jails across the state in the past year.

WFAE: OK, let’s say there is comprehensive immigration reform. There are always going to be people in the country illegally – that won’t change. Is it OK for the sheriff in Mecklenburg to say, we are not going to participate in 287(g) and we’re not going to honor detainer requests?

WFAE: To back up, when you said you trust law enforcement to make the right decision, is that safe to say that if Garry McFadden in Mecklenburg says this is what we’re doing, that you trust him? You back him?

CAL CUNNINGHAM: I trust the voters in Mecklenburg County to weigh in on exactly that.

Cunningham’s campaign doubled down on his pro-sanctuary cities position later in the week, claiming Senator Tillis’ new legislation to compel sheriffs to work with ICE is merely a mechanism to “score cheap political points.”

Cunningham was also asked multiple times by WFAE if he supports proposals from the Democrats running for President that would provide taxpayer-funded health care to illegal immigrants – he did not rule out doing so.

WFAE: Many Democratic presidential candidates support the idea of giving undocumented immigrants health coverage. Do you support that?

WFAE: You talked about bringing forth a plan later on in the campaign. Is (health care for undocumented people) an unknown or undecided at this point? Help me understand where you are and where the campaign is?

CAL CUNNINGHAM: I’m traveling North Carolina, and I’m listening to voters around our state. And I’m listening to what it is they are talking about. And what I’m hearing them talk about is health care for folks right now, making sure that we build off the Affordable Care Act and bring down the cost of prescription drugs….I hear very little conversation about immigration. But I know it’s an important issue.

Cunningham’s consideration of such a radical policy in order to appease his left-wing base marks a major shift for him on the issue. In a 2010 Democratic primary debate, Cunningham opposed health care for illegal immigrants and said they should “go to the back of the line” and “pay fines.” (2010 WRAL Democratic Presidential Primary Debate, 7/10/10, 15:50)

Cal Cunningham needs to clear up the following:

In the meantime, the Tillis campaign will be revisiting Cunningham’s train wreck of an interview later this week to highlight the radical and contradictory positions he took on a number of other issues. Stay tuned.